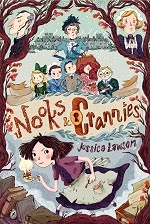 My second book, Nooks & Crannies, comes out on June 2nd and I'll be doing a few giveaways next month on various blogs, but wanted to offer up one of the early copies here. It was pitched to Simon & Schuster as Charlie and the Chocolate Factory meets Clue. The cover and interior illustrations were done by the very talented Natalie Andrewson.

Tabitha Crum is a girl with a big imagination and a love for mystery novels, though her parents think her only talent is being a nuisance. She doesn't have a friend in the world, except her pet mouse, Pemberley, with whom she shares her dingy attic bedroom.

Then, on the heels of a rather devastating announcement made by her mother and father, Tabitha receives a mysterious invitation to the country estate of the wealthy but reclusive Countess of Windermere, whose mansion is rumored to be haunted. There, she finds herself among five other children, none of them sure why they've been summoned. But soon, a very big secret will be revealed— a secret that will change their lives forever and put Tabitha’s investigative skills to the test.

So if you don't want to wait a month to find out what sort of secrets are revealed at Hollingsworth Hall, just leave a comment below to be entered in the giveaway. I'll pick a winner via Random.org on Sunday, May 10th. UPDATE: The winner is Tania del Rio! Congrats Tania! I'll try to get in touch via Twitter and you can let me know an address to ship the ARC to :)

Here are snippets from early reviews:

"Original, engaging, and funny.... The writing is beautiful, expertly capturing all the suspense, hope, and love in the story.... A delightful gem that will fly off the shelves."
— School Library Journal, STARRED REVIEW