I recently read an article in The Washington Post online about the real Berenstain family. Husband-wife couple Stan and Jan Berenstain wrote the Berenstain Bears books for fifty years (Stan died in 2005 at the age of 82), and now their son Mike is taking up the family business. They write and illustrate in the same studio, located in Bucks County, Pennsylvania (which serves as the inspiration for Bear Country—fun little fact for you).
~
(*Photo of Jan Berenstain working in her studio*)
~
I loved our Berenstain Bears books growing up. They were an institution in my home and I feel lucky to be the daughter (there are 3 of us) who inherited them. That said, they seem a little different as I’ve gotten older. It’s been interesting to watch the series evolve.
~
~
They started with Brother and Sister Bear going to the doctor and dentist and to school for the first time, having a babysitter, spending a week at Grandma’s, learning about Santa Bear and strangers and new pets…and then there was a shift as they got older.
~
~
There were sibling fights and and lies and best friend spats and peer pressure and stealing. With the environmental movement came Berenstain Bears Don’t Pollute (Anymore). There’s one book where Mama Bear has a mental breakdown in the car from trying to shuttle everyone around to activities. I’m sure it’s true to life, but somehow the magic of Bear Country was lost to me when I read that one. There are also books about online safety and childhood obesity. Which is…good, right? I mean, if the kids can relate, then I suppose that’s great. 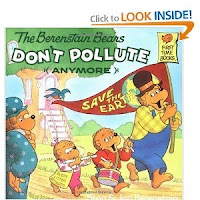 As a former teacher for little ones, I can tell you that the kids still love the new books, but me? I get a little nostalgic for the older books (but I’m a nostalgic kind of gal in general who—shhhh—still kind of wishes she had her 1979 Buick Park Avenue with a CB radio, 8-track player, baby-blue interior, and a V-8 engine…and I drove that to high school in 1998).
~
~
Part of me wonders what it would be like if Frog and Toad were still having new adventures. Would they be talking about the dangers of internet stalkers or Facebook bullies?
Frog & Toad Fight Amphibian Obesity 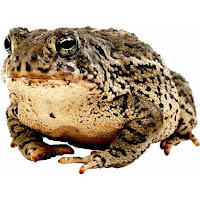 ~~~
~~~
~~~
~~~
~~~
~~~
~~~
~
Overall, I say kudos to the Berenstains for “keeping it real” and staying relevant. It’s a reminder to me that, as writers, part of our research is to study the classics (just the other day, Writers House agent Steven Malk tweeted that “everyone should read The Great Brain series” from the 1970s), but we’re very much encouraged to keep up with what’s been published in the last five years. This gives us guidelines to see what publishers are buying and distributing. The Berenstain Bears are simply adapting to the market’s needs. I just don’t like seeing Mama Bear all stressed out.
Did any of you read those books as children, or read them to your kids now? Just wondering if you’ve noticed the shift in subject matter and if it strikes a chord with you.
Happy Friday! On Tuesday, I’ll be using my leftover Valentines heart candy to attempt to write, *gulp*, a silly poem. We’ll see what phrases I end up with (I’m guessing a lot of “Hugs” and “Be Mine”).
Posted by Jess at 4:23 AM