It's official. The role of Katniss Everdeen, protagonist of the amazing Hunger Games books by Suzanne Collins, will be played by Jennifer Lawrence.

Jennifer's most recent role was in "Winter's Bone," a Sundance Film Festival hit that earned her an Oscar nomination.

Some people are disappointed with the choice, saying a) she's blonde and blue-eyed (Katniss has dark hair, an olive complexion, and grey eyes in the novels), b) too conventionally pretty, or c) she's too old (20, whereas Katniss starts the Hunger Games trilogy at 16). 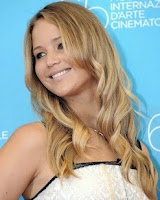 My opinion? I haven't even seen this girl act, so I'm not about to judge. I do think the fact that she's nabbed herself a Best Actress Oscar nomination at such an early age works in her favor. Plus, I think that Hollywood has some experience using hair dye and colored contacts, altering appearances, and aging people up and down, so I'm not too worried about all that.
.
Again, I don't know very much about her, so I'm not in a good position to form a solid opinion. I know people were rooting for a few other actresses, so I can understand the disappointment if your pick didn't make the cut.
.
.
.What do you guys think?

This is a photo from her movie, "Winter's Bone." 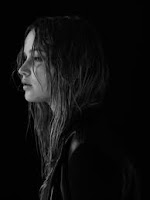 .
.
.
and HERE
.
.
and HERE for an article where the Director defends his choice.
.
.
.
Finally, here are some gems that agents posted on Twitter this week (you can click on the underlined name to access and follow their Twitter accounts):
.
sarahlapolla Sarah LaPolla
Writers: Do not refer to yourself as "prolific" in your query. You'll sound like a douche.
.
louisefury Louise Fury
If you can write and you know anything about mob culture? Email me!
.
kate_mckean Kate McKean
Only. Query. One. Book. At. A. Time.
.
sarahlapolla Sarah LaPolla
Writers, you need an agent!! But even if you try to publish on your own, have a lawyer or agent-friend review any contract before signing!
.
daniellechiotti Danielle Chiotti
So many writers offering me "exclusive subs" when I haven't requested them. Is this some new--and bad--advice circulating around Internet?
.
JillCorcoran Jill Corcoran
here is one for you all...why is it so hard for me to find a great romantic comedy for YA?
.
JillCorcoran Jill Corcoran
Romantic Comedy has unmistakable voice + high concept plot + loveable characters
.
.
Hope you enjoyed those. Happy Friday, and enjoy your weekend!
.
PS- Tiny town weather update: it was 72 degrees yesterday--the kiddo and I were out in shorts and t-shirts, frolicking gaily at the park...woke up this morning to snow. That's Colorado for you.
Posted by Jess at 5:38 AM