Straight From The Agents 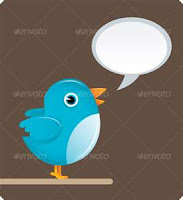 I like to follow an agent or two on Twitter (mostly those who represent children’s and YA fiction), and love hearing their thoughts on publishing & query letters, news about their clients, and even general musings about their subway rides (seems exotic to me in Colorado).

In the spirit of getting to know some cool literary agents, I thought I’d share some Tweets of the Week from a few of those I follow. *On a side note, I follow authors too, and let me tell you…it was pretty cool reading Judy Blume’s up-to-the-minute feelings about the Oscars red carpet and hosting—Wait-- was that woman wearing only a bra? and I thought Anne Hathaway was charming. She got zero help from co-host were two of the gems.

Agent Tweets from this week:

WolfsonLiterary Michelle Wolfson
Try to spell your character's name right in your query.

MarleneStringer Marlene Stringer
Qs written from pov of protagonist fail most of the time. Not to mention they are confusing as hell.

sarahlapolla Sarah LaPolla
Was told I look "all east village" today. I think it was code for "tired" and "sickly."

Ginger_Clark Ginger Clark
"There is an asshole in every room. If you look around a room and don't see an asshole, then guess what? You're the asshole." So true.

literaticat jennifer laughran
I need the people on TODAY to never again say "bromance" or the even worse "chickmance." REALLY MORONS? CHICKMANCE?

kate_mckean Kate McKean
How come the boys in YA novels are always perfect, but the girls never are?

literaticat jennifer laughran
OMG. The Today Show said "bromance" again. WHAT DID I TELL YOU PEOPLE ABOUT THAT?

SaraMegibow Sara Megibow
On our homepage at http://www.nelsonagency.com is "Subscribe to our newsletter here" Do it! This month I talk about contemporary YA novels.

WolfsonLiterary Michelle Wolfson
I really feel for the poor student driver lurching down the street while that cabbie honks loudly behind him.

agentgame The Agent Game
RT by kate_mckean Didn't send pages as requested in our query guidelines? Then don't reply to your rejection with a complaint about us not reading anything.

kate_mckean Kate McKean
Google your title. If it's being used, pick something else. Not because you can't use it, but because it's not very original.

stevenmalk Steven Malk
Read both the classics AND what's on the bestseller list right now. They're not mutually exclusive and both are important.

ElanaRoth Elana Roth
Historical and fantasy will always bend protag's age range a little because of their settings and contexts.

sarahlapolla Sarah LaPolla
Writers: If you say I was "recommended" to you, but don't say from whom, I just assume you mean "by the Internet." That's not a referral.

Ginger_Clark Ginger Clark
I am giving my clients an extra week of notice that Bologna is coming up, because I am taking time off afterwards. Seems only fair.

FYI~That last tweet by Ginger Clark is related to the Bologna Book Fair, a major event that tons of agents attend. I’ll be doing a post on it toward the end of the month.

~~~
*UPDATE*- Click HERE to win a query critique from the amazing Sarah Davies of Greenhouse Literary (through WriteOnCon).

*UPDATE*- Click HERE to win a query critique from the awesome Jennifer Rofe of Andrea Brown Literary Agency (through WriteOnCon).
Posted by Jess at 4:12 AM