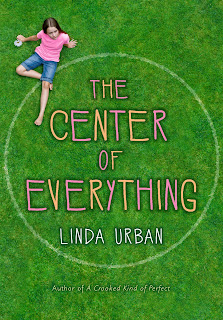 Friends, we have a treat today! Linda Urban, a queen of contemporary/realistic middle grade fiction, is going to talk about character development and middle grade protagonists.

Linda has been one of my favorite middle grade authors since I picked up A Crooked Kind of Perfect. Her new book (which I am GIVING AWAY TO A LUCKY SOMEONE) is called The Center of Everything:

For Ruby Pepperdine, the “center of everything” is on the rooftop of Pepperdine Motors in her donut-obsessed town of Bunning, New Hampshire, stargazing from the circle of her grandmother Gigi’s hug. That’s how everything is supposed to be—until Ruby messes up and things spin out of control. But she has one last hope. It all depends on what happens on Bunning Day, when the entire town will hear Ruby read her winning essay. And it depends on her twelfth birthday wish—unless she messes that up too. Can Ruby’s wish set everything straight in her topsy-turvy world?


Hi Linda, thanks for joining us! You now have 3 wonderful middle grade books in the world. How has your writing process evolved from Zoe (A Crooked Kind of Perfect) to Ruby Pepperdine (TCOE)?

Zoe’s book began as a picture book which ended up serving as a brief outline for the novel.  With Ruby’s book, I had no idea what it was to be when I started.   I had an image of a girl standing on the side of a parade route.  I had no idea where it would lead.  So in that way, they were different.

But in general, the processes were similar.  When I’m really engaged, I write every day – but only in short bursts and usually early in the morning before my family is awake.  I reread the previous day’s pages, making edits as I go, and then continue with the new stuff.  Most of the time I write scenes in the order that I expect they will occur in the book, though every once in a while things get rearranged in revision.

After about 30-40 pages of drafting, I have a pretty clear understanding of how I want the ending to feel and where it might take place.  Then the job is to build a bridge between what I’ve written and that ideal ending.  Often this takes the form of bullet points.  You know: this happens, then this, then this . . .  I try not to think about it too much, but rather to think in it, to stay in the story and with the character and let things spool out.  Too much analysis too early makes me self-conscious.

I don’t know, exactly.  It’s not a very satisfying answer, is it?
New books often appear to me in first lines, sometimes in images.  If I’m open to them, I can just start typing and discover what is behind them.  It’s not a conscious process, for the most part.  Not until revision, anyway.

I know there are a lot of writers who use character worksheets or use stock photos to get clear about their character’s physical traits.  Neither of those things work for me.  I work from the inside out and I only come to know my characters by writing them.  They come alive as they move around their world and encounter other characters.

Agents and editors have said that the middle grade voice is one of the hardest to write. What advice would you give a middle grade writer who has plenty of plot ideas, but struggles to find their characters' authentic voice?

Character usually comes first for me, but if I had a great plot idea and no clear voice or character, I would start writing in first person.  I’d let my main character explain things and try to understand how she felt about them.  Is she proud of what happened?  Embarrassed?  Is she reluctant to tell?  Is she lying?

The answers to those questions don’t always show up in the content of the response, but in the manner that response is given -- in sentence structure and language choice.  I mean, a girl who thinks of herself as brainy, but who has done a stupid thing will describe that action in terms quite different from one who has little confidence and believes that stupid thing she did was par for the course.  One might try to hide her actions or overcompensate by using particularly large words and complicated sentences.  The other might sound resigned to her fate.

I really think that if we let ourselves get into character and then let that character speak from his or her unique situation, voice will appear.  Most of the time we just have to get out of our own way.
In your opinion, what are three elements that should be part of any middle grade novel?

First: honesty.  I think we owe it to each other to be truthful.  This idea comes up a lot when we talk about books with difficult subject matter, but it is just important to be truthful about small things.  How does it really feel to have salami for lunch when all around you kids are eating ham and cheese?  It seems like such a small thing and maybe even petty, but if we are honest, we might admit that it matters more than we would like.  And being truthful about the small stuff earns the trust we need to talk honestly about the larger issues.

Second: hope.  This may be a personal thing, but I want even the most despondent dystopia to have a flicker of hope – even if it is only a moment of meaning or connection.

Third: a character the reader wants to spend time with.  I don’t believe this character needs to be “likeable.”  In fact, I think we’ve done ourselves a disservice by suggesting that likeability is the most important character trait in a novel for kids.  But I do think that there has to be something about a character – something intriguing or companionable or engaging – that gives readers a reason to stick around and figure him or her out.

What is your favorite kind of donut?

I’m a die-hard cider donut fan – fresh out of the grease.  It’s one of my favorite things about Fall in Vermont.

*That's my favorite kind, too (I'm not a big frosting or sprinkles fan)

For a chance of winning a copy of Linda Urban's The Center of Everything, leave a comment for Linda and include your favorite kind of donut! I'll announce the winner next Friday.

Other middle grade books by Linda are: 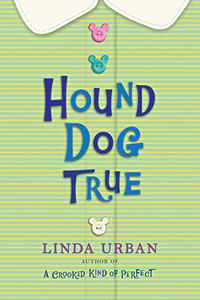 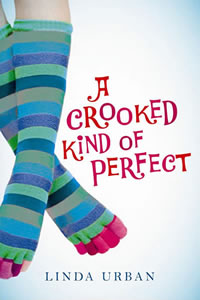