Want To See The Cover Of My Next Book? Here's WAITING FOR AUGUSTA

The fine folks over at YA (and Kids!) Book Central are doing my cover reveal today! Actually, it's a full jacket reveal. Kenard Pak's  artwork was so lovely that we wanted to show as much of it as possible, and Lizzy Bromley of Simon & Schuster Books for Young Readers has done a fabulous job with the cover/jacket/book design. Just click the link to see WAITING FOR AUGUSTA's jacket and enter to win an early copy!


And here's the cover~ remember, the entire jacket is over at the above link, so if you want to see that (and if you want to enter to win an ARC) head over there next! The book will be available May 2016. 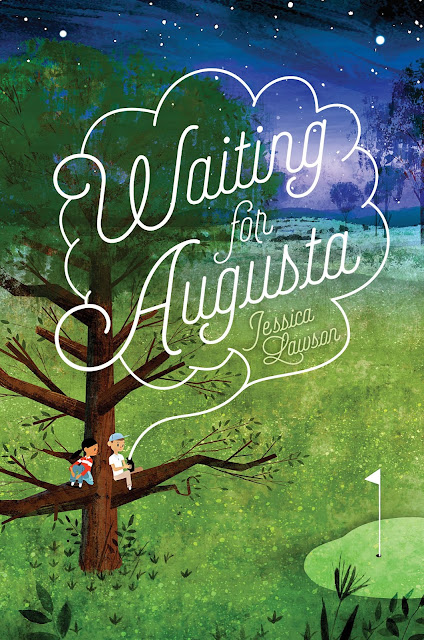 About the Book
Eleven-year-old Benjamin Putter has a lump in his throat, and he’s certain it’s a golf ball.
It sounds crazy, he knows. But everything's been topsy-turvy since his father died last month.
Then one day something starts tugging at Ben, telling him to hurry to Augusta, Georgia—home of the most famous golf course in the world.
Ben might be going loony, but escaping Hilltop, Alabama sounds like a darn good idea. (And just maybe it will make that lump go away.) As he makes his way to Augusta, Ben partners up with a myserious runaway named Noni, and they embark on a journey with surprises—and possibly magic—at every turn.